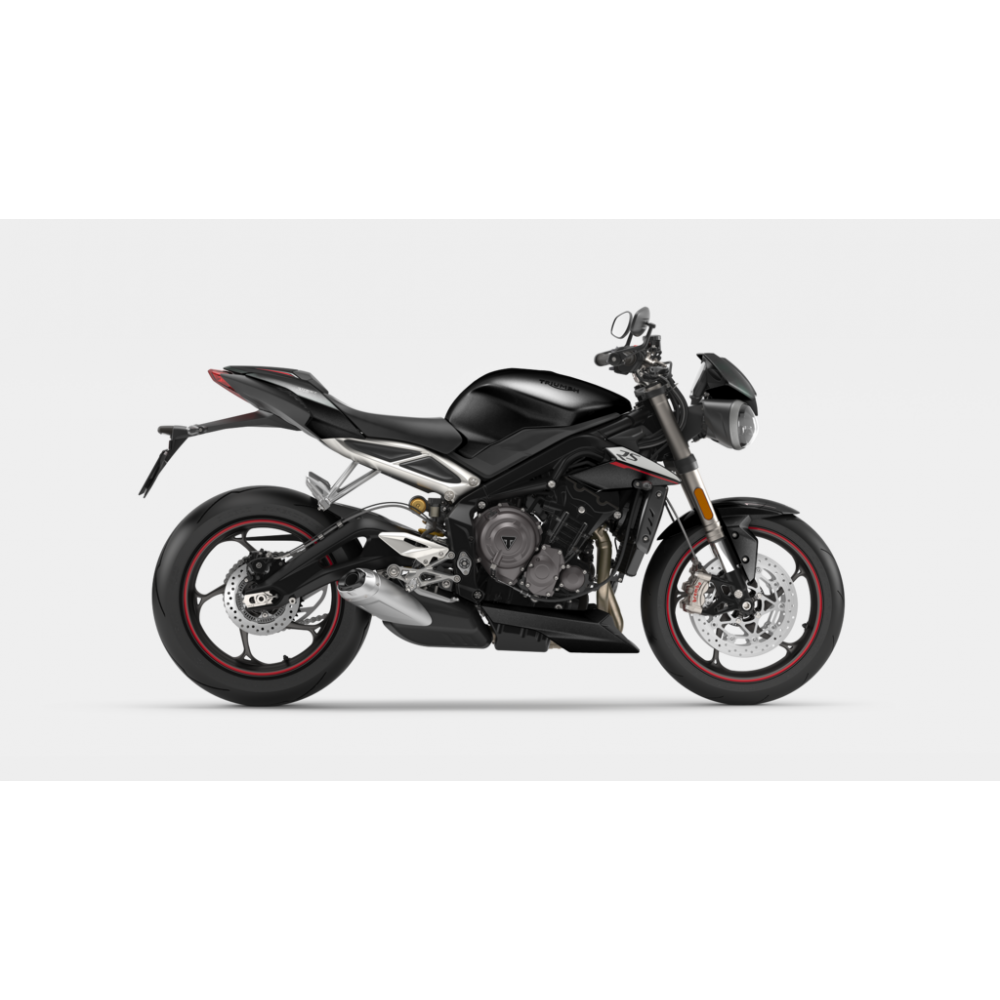 With a major step up in performance this new generation Street Triple RS has a significantly updated 765cc triple engine, developed by Triumph’s Moto2™ engine team, that delivers track-ready levels of power and torque.

The Street Triple has always set new benchmarks with its revolutionary, category-defining, game-changing ride. Now, the new RS has raised the bar all over again.

STREET TRIPLE PERFORMANCE
The new benchmark-setting Street Triple RS is built on a winning formula of category-leading equipment and handling, with 9% more power and torque in the mid-range, and a notable improvement in throttle responsiveness.

Already a revolutionary game-changing motorbike, the new generation Street Triple RS has evolved its own winning formula with a new more aggressive style, better performance, high specification standard equipment and even better rider technology.
Here are some highlights to look out for when you test ride this incredible motorcycle.

1. IT’S OUR BEST STREET TRIPLE EVER
The most addictive, explosive and intuitive performance street motorcycle you can buy, this new top-spec Street Triple RS delivers track-ready peak power of 123PS at 11,750rpm and peak torque figures that reach 79Nm at 9,350 rpm for an astonishing level of agile dynamic handling. It’s fast, fun, and stylish, it’s the lightest bike in its class, and the new engine updates ensure increased torque low-down and across the mid-range for a more immediately responsive ride that’s as suited to the track as it is to the road.

Built into the new Street Triple RS is the highest specification equipment ever seen on this range, even better technology than ever before, and superb styling improvements to give the bike a more distinctive aggressive look, wherever you ride it. There’s even a choice of over 60 genuine Triumph custom accessories to personalise your Street Triple and get even more from your ride.

2. TRIPLE 765CC ENGINE WITH MORE MID-RANGE
The new Street Triple RS brings a major step up in performance from an updated 765cc triple engine that has been designed with performance updates developed as part of Triumph’s Moto2™ engine advancements by the same engine team. As a result of these engineering improvements and efficiencies the new powerplant is more responsive, and it’s stronger, cleaner and Euro 5 compliant too.

This new Street Triple engine is more performance-focused and characterful (the RS engine, for example, delivers even more peak torque than the previous generation’s). There’s also improved responsiveness which is delivered by a 7% reduction in rotational inertia for a noticeable improvement in torque right from the start and up through the mid-range that also brings a crisper, purer and more refined triple sound.

3. POWER-TO-WEIGHT RATIO
The new generation Street Triple RS enjoys better performance, exceptional build quality, more aggressive looks, and more technology than ever before, and it’s still the lightest bike in its class which means the bike’s power-to-weight ratio is incredible, and central to its exhilarating agile handling, intuitive dynamic feel, and outstanding capability.

4. MOTO2™ INNOVATIONS
Already renowned for its exciting performance focus and dynamic character, the new Street Triple engine now enjoys upgrades that were developed by our Moto2™ engine team that have resulted in a higher peak torque of 79Nm at 9,350 rpm for the RS model, with 9% more power and race-style torque across the mid-range, peaking at 123PS.

5. EVEN BETTER TECHNOLOGY WITH HIGHER SPECIFICATION
The new Street Triple RS now exclusively has enhanced TFT screen functionality, with 2nd generation graphics and comes with the new MyTriumph connectivity system pre-installed with all the software needed to support the accessory-fit Bluetooth module for GoPro and turn-by-turn navigation interaction. In addition, the Street Triple RS now benefits from Triumph Shift Assist – an up and down quickshifter now fitted as standard for the first time.

This new generation brings a higher level of category-leading technology for even more riding confidence and control, with improved riding modes that have been optimised to better utilise the new engine upgrades, plus adjustable ABS and switchable traction control for better riding feel, and ride-by-wire for precise throttle response.

6. MORE AGGRESSIVE STYLE
The new Street Triple RS has benefited from significant styling enhancements and now exhibits a more aggressive look, most noticeably with an all-new twin LED headlight that has a very striking new shape and more aggressively-styled Daytime Running Lights on the RS only (local legislation permitting). The all-new bodywork now has cleaner lines and a more angular sporty style, with new generation changes to the fly screen and air intake, side panels, rear unit, seat cowl, and belly pan. There’s also a brand new and restyled silencer with a premium carbon fibre finisher, unique to the RS.

7. STREET & TRACK CAPABILITY FOR A CATEGORY-LEADING RIDE
The new Street Triple presents an agile exhilarating ride with incredible precise and engaging handling, which is delivered by a combination of advanced engineering developments such as the gullwing swingarm which has a torsional stiffness and lateral flexibility that maximises stability both on the road as well as at track speeds for even greater rider confidence.

8. REFINED FINISH & DETAILING
New shape mirrors instantly give a more contemporary look to the RS front end, while the Street Triple’s handlebar clamp has been restyled to feature premium Triumph branding. In addition, there are more harmonised component finishes, such as black control plates and rear footrest hangers, and satin metal heel guards and silencer, to add even more eye-catching looks.